One death every 52 minutes.

That’s how frequently someone died in crashes involving a drunk driver in the U.S. in 2013—10,076 deaths in total. While that number represents a 2.5% reduction in deaths from the previous year, the National Highway Traffic Safety Administration (NHTSA) is offering a new mobile app—called SaferRide—to save more lives.

Simply put, SaferRide helps people who have been drinking to get a safe ride home.

The app helps keep drunk drivers off the road by allowing users to call a taxi or a pre-programmed friend, and also helps easily identify the user’s current location. The app has a very streamlined function, and its interface is purposefully simple. The app only has three large buttons on the home screen: “Get Taxi,” “Call Friend,” and “Where Am I?” 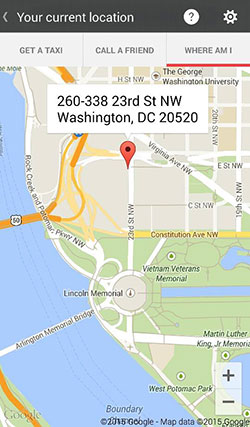 As advertised on the app, “too drunk to drive means too drunk for complicated apps.” SaferRide lets you:

The app’s simple interface belies the amount of design and development time that went in to making it extremely useful. For instance, the app pulls in data from Yelp—a social network that connects people with local business—to get local taxi information.

There’s never any excuse to drive after drinking, and now it’s never been easier to help end drunk driving. Use NHTSA’s SaferRide app to get home safely.

The app is available on Google Play for Android devices, and Apple’s iTunes store for iOS devices.

You can download this and other cool mobile government apps with just a few clicks from our USA.gov Federal Mobile Apps Directory.

Federal agencies can get their apps in the directory by using the Federal Mobile Products Registry.