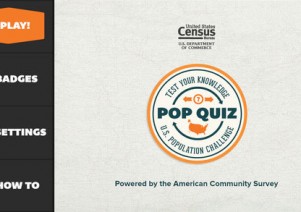 The U.S. Census Bureau today released Census PoP Quiz, a new interactive mobile application that challenges users’ knowledge of demographic facts for all 50 states and the District of Columbia. The new app, which draws from the Census Bureau’s American Community Survey, aims to raise statistical literacy about the U.S. population.

Census PoP Quiz provides an introduction to the statistics that define our growing, changing nation and is a great way for everyone to learn facts about all 50 states, the District of Columbia and the nation in a fun, relevant way.

With each state challenge completed, users will earn a badge to show their knowledge of various state demographic characteristics. After earning badges from every state, the app will unlock the final U.S. challenge. Throughout the quiz, players can share their badges on social media sites including Facebook and Twitter.

The app is free and available for both iPhone and Android smartphones and tablets. Features include:

Census PoP Quiz is the third in a series of Census Bureau mobile apps. The mobile initiative is one example of how the Census Bureau is working to make America’s statistics available anywhere, anytime to everyone and on any device—consistent with the Department of Commerce’s open data priorities and the federal government’s Digital Government Strategy.

Census Bureau Director John Thompson recently recorded a video interview explaining what Census PoP Quiz is, why it’s a great learning tool, and how it differs from our other mobile apps.

“Census PoP Quiz is the culmination of three great mobile apps from the Census Bureau,” Thompson said. “Each one highlights our statistics in a different way, whether it is our economic indicators through America’s Economy or American Community Survey statistics about your ideal community from dwellr. They showcase the variety of information that developers can use to create useful applications for the public.”

Stop searching and save time! You can also download other mobile government apps with just a few clicks from our USA.gov Apps Gallery.

This post was originally published on the Commerce Blog. __