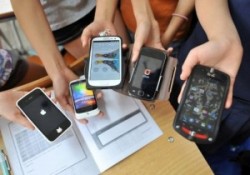 The real bread and butter came in the smartphone product category. According to Gartner, sales of smartphones accounted for 55 percent of overall mobile phone sales in the third quarter of 2013, and “reached their highest share to date.”

As the price for smartphones becomes more and more affordable, users are rushing to replace their “regular cell phones” for smartphones. Gartner estimates that global mobile phone sales are on pace to reach 1.81 billion units in 2013, which is up 3.4 percent from 2012.