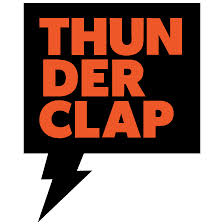 Thunderclap is the latest social media and crowd-sourcing platform available to federal agencies to better engage with the public, with a newly negotiated government-compatible Terms of Service (TOS) agreement. GSA collaborated with Thunderclap to negotiate the amended terms, which brings the total number of tools with federal-compatible agreements to 66.

Social media is an easy way to say something. But sometimes it’s a difficult way to be heard, with the vast amount of content being shared every day. Thunderclap is a “crowdspeaking” platform that helps people be heard by saying something together using their Twitter and Facebook accounts. It allows a single message to be mass-shared, flash mob-style, so it rises above the noise of your social networks. By boosting the signal at the same time, Thunderclap helps a single person or organization create action around a specific campaign. Those who agree to support a cause authorize Thunderclap to tweet from their accounts or blast out a Facebook post in the event that the level of support “tips,” or rises to a pre-determined threshold.

As one example, the White House launched an account on Thunderclap to call for common-sense steps to reduce gun violence. Several other agencies are considering using Thunderclap as an additional component of their social media campaigns now that a federal compatible TOS is available.

Thuncerclap is now listed on HowTo.gov among the almost 70 other tools and apps with federal-friendly terms of service.

Watch the webinar or view the slide presentation, Amplify Your Message with Thunderclap, to find out more about using the tool.