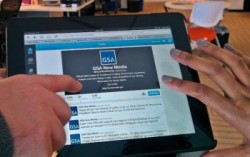 Today at the #SocialGov Summit for Social Media Week DC, we’ll showcase two new initiatives for citizens, agencies and small businesses that help unlock the full potential of social data for the next generation of government services and engagement. Leading innovators in government will also be on hand to show how social data is empowering them to improve federal programs.

The first initiative is the release of new baseline social media metrics for federal agencies “Social Media Metrics for Federal Agencies”), developed by the Federal Social Media Community of Practice. The goal is to provide a consistent way to better evaluate the impact and value of using social media to improve government programs and deliver services to citizens.

Too often, we hear success in social media defined by the number of Facebook friends or the number of tweets someone may send. While these metrics provide some basic measurement of engagement, they don’t tell you enough about whether you’ve achieved any meaningful outcomes. With the new recommended metrics, agencies now have access to a broader and deeper set of measures that can help them truly assess whether their efforts are achieving the results they want. Ultimately, this will lead to better informed decision-making and better use of taxpayer dollars.

Some examples of the deeper measurements include:

The recommendations are the result of federal managers looking for a government-wide approach to tie social media efforts to outcome-driven metrics — rather than having each agency develop their own metrics, in isolation. In collaborating on the metrics across multiple agencies, the inter-agency group took into consideration the need to include metrics that can easily be derived from freely available analytics tools and the continued importance of protecting citizens’ privacy when collecting any performance data.

Second, GSA is rolling out an API from the Federal Social Media Registry. The Registry is a shared service that allows agencies to maintain an official inventory of all their social media accounts from over 20 different platforms, including Facebook, Twitter, and YouTube.

The potential of the API is demonstrated by basic widgets that open up content from social media accounts across government, searchable by agency, topic or language — regardless of the source, and without navigating individual federal websites or social media platforms. For example, content can be mashed up across one agency (ie all Twitter activity from all USDA Twitter accounts) or across a particular topic based on keyword tags (ie all Twitter content that has been tagged as Spanish content or tagged as “business” content etc).

Via the API, we’re road-mapping the use of customized social data streams, which allows:

The potential of this verified API source is especially underscored by crisis situations like Superstorm Sandy, where accurate, real time information can accelerate and assist preparation and response efforts, and dispel rumors. By making use of the API, media outlets can embed the widgets to pull real-time data across multiple government social media accounts like FEMA, EPA, and CDC.

The announcement of the baseline social media metrics and the API is only one part of the #SocialGov Summit. The event also features tremendous work from multiple agencies that showcases how social data is changing the way the federal government is doing business in 2013. The presentations, followed by a panel, include:

Together, these initiatives represent a new phase of social media in government where social data spreads into the hands of all public program managers and citizens. The efforts illustrate how government agencies are simplifying access to government content and advancing the goals of the Digital Government Strategy ** — ensuring that people can access government information anywhere, anytime, on any device. **